One of the more remarkable tidbits from this time was what Bowie stumbled upon at a run-down bookstore in Neukolln. In the bookstore, Brian Eno recalled was named “Schau und Kauf” next to a hookah bar the two frequented, Bowie came across a film can tucked underneath a dilapidated book shelf and a mound of novels about the adventures of tax attorneys, and a collection of medical studies on methamphetamine. The can contained a large quantity of captured film. On the label, in faded blue pen, the title read: “Das Geheime Leben von Arabien”

Bowie brought it back to his apartment to watch and soon realized the film contained unfinished scenes from a silent era German film. He went to the local West Berlin library and found the film was supposed to be the masterpiece of Walram von Kleistpark, who started his career as Fritz Lang’s cinematographer before directing several successful German films. It turns out the movie was a total fiasco, which lost its funding fairly soon into production, and stopped completely after Kleistpark went mad. 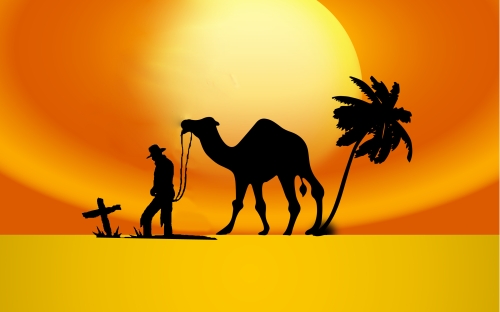 Believed to be the original movie poster for the film, Das Geheime Leben von Arabien.

Fascinated by the scenes, Bowie was inspired to write a song in the film and director’s honor. After two days in the studio, and some argument with Eno, the song was finished and officially ended the album.

“I loved the song. I just wasn’t sure it fit with what we were doing on ‘Heroes‘ but David was convinced. He was obsessed with the song because of the movie. He loved that movie. About twenty minutes of barely-coherent scenes, but I remember him taking it everywhere. He thought it was a sign. I saw it as a cry of desperation. Anything to take his mind off the withdrawals. Plus, he was heavily into shamanism at the time. Who wasn’t?” Eno remembered. “In hindsight, I think he was right. It counterbalanced the darker elements and tones of the album. It gave it a hopeful ending, which was ironic and fun because the film—from what I remember—ended badly.”

Bowie had given the footage to Nicolas Roeg with the intention of having it edited and used as the music video for the song. However, soon word reach the Kleistpark Estate which promptly sued Bowie and RCA for copyright infringement. In an out-of-court settlement, the footage and edited video were handed over to the Estate; in exchange, the song could remain on the album provided it was not released as a single. The Researcher was able to visit the Estate’s archives and view the taboo music video. It is a wonderful tribute to Kleistpark’s vision and enhances Bowie’s work tenfold. It is a shame that, like the unfinished masterpiece, the video will never see the light of day.

However, the Researcher was allowed to take and publish notes from the viewing party. If you listen to the song, these transcripts match well with it…

0:00 – 0:18 Open on a vast ocean of sand, the camera slowly pans down to see our hero (Buckaroo) as a spec riding across the desert plain. It pushes in on him and as he grows we watch a trail of dust climb to the sky behind him. As the guitar trickles eight seconds in we cut to his face: determined, heartbroken, angered: he strikes his cyborg camel (Anstrum) and a fat cloud of sand kicks up behind them as his one-humped steed bursts into hyperdrive. The drums make a fill. Cut to: a older man in all black (Arabia) sitting at a bank teller’s desk. His feet kicked up on the table and he is slicing into a large apple with a larger hunting knife. Signs of violence surround him: bullet holes in the wall, possible blood spatter, papers everywhere. We see the juice from the fruit bleed onto his black glove. Meanwhile, three men stand in the middle of an abandoned dirt street in apparent anticipation of our hero.

0:19 – 0:28 A montage of images: a close-up of Arabia, his scarred face with a smile; Buckaroo looking off in the distance, stoic, handsome; the young heroine (Nova) hiding herself underneath an umbrella, it looks like concave rose, silk ruffles environ the rim of the florally decorated canopy, it shields her pearlescent skin, which glows slightly throughout the monochromatic film; large bags of money; a snake slithers through a human skull on the dirt.

0:29 – 0:55 Buckaroo walks through a crowded bar. Heavy drinking. Harlots laugh and seduce their clients. Opium plumes in the foreground. Two cowboys choke each other in the corner. A man clings to a chandelier. Slowly people make note of him. He’s infamous. Whispers go around. A knife is pulled and man leaps out at his back. He catches sights of the assailant in the bar mirror and shoots the man without ever fully turning around. The man slowly drops to the floor. Buckaroo then locks eyes with Nova as Bowie sings: “Then I saw your eyes at the cross fades.” Quickly cutting to Arabia’s eyes as he watches from his table above. He’s intrigued by the newcomer.

0:56 – 1:40 Another montage: Buckaroo and Nova sit underneath a palm tree at an oasis; he tries to show her how to shoot, she seems to be very clumsy with his gun, but then she surprises him twice: revealing she has a pocket pistol, and she’s a very good shot; Nova introduces Buckaroo to Arabia; a budding friendship between Buckaroo and Arabia on camelback and arm wrestling while the chorus of Bowie moans/bellows: “The Secret Life of Arabia”; a train heist; Nova confesses something to Buckaroo; the camera pans across a group of native-looking mole people on their knees, terror on their faces; Arabia pulls Nova in closely and kisses her hard on the mouth, we see her hand reach for her pocket pistol only to be halted by Arabia’s hunting knife that comes into frame tapping her hand still; Buckaroo is double-crossed by some of Arabia’s goons, the edit cuts back and forth between his eyes and theirs, and again we hear: “The Secret Life of Arabia”.

1:41 – 1:57 We return to the oasis where we saw Buckaroo and Nova fall in love. He leaps from Anstrum and rushes toward Nova. As he gets closer, his steps slow. We see her laying near the spring water. Her back is to us. She seems to be asleep. We witness his fear as he reaches out for her. His hand on her shoulder, he turns her over. She is lifeless. Dark rings around her neck. We close in on Buckaroo and Nova from above and he lifts his head to the us and cries along with Bowie: “Arabia!” Cut to—

1:58 – 2:57 Buckaroo races through the desert. The next moments are inter-spliced between past and present as Bowie continues to call out “Arabia!” met with his whispers of “secret, secret.” Two riders from Arabia’s gang catch up to Buckaroo on their mechanical camels, guns drawn//Arabia and Buckaroo are standing at the base of a waterfall of oil//amidst gunfire, Buckaroo slides underneath Anstrum and takes out both riders//small children with pipes stretching out of their backs work in some kind of jewel field//the three men from earlier have readied themselves behind overturned wagons//a bank teller sits with his hands up as a silhouette consumes him//a sniper shot takes out one of Anstrum’s front legs crashing the beast head first to the sand, propelling Buckaroo through the air, but it is to his advantage as he shoots the three men hiding behind the makeshift barricade while passing over them//Arabia’s black glove is removed and rests near a grotesque skeletal hand, meat and machine construct the dorsal exterior of the hand and small ribbed tubing runs along and around the raw bone fingers that tap on the hardwood//Buckaroo crashes to the dirt and rolls, just missing another bullet from the sniper; he lies still for a moment until he catches a glimmer from the sniper’s rifle and fires; we see a man fall from the water tower in the distance.

2:58 – 3:45 With the music at full tilt, the camera tracks Buckaroo as he walks solely through the dead street. Bowie mimics his calls for “Arabia!” He beckons him to come out and fight. We are behind him as he stands in front of a building from the street, a sign reads “BANC,” it is torn from the hinges and lays upside-down, bullet holes mark the front of the building. Then Buckaroo suddenly, inexplicably jolts forward and falls over himself. In confusion, we follow the camera as it slowly turns revealing Arabia standing on the veranda behind Buckaroo, smoke rising from his gun. He smiles. He walks slowly down the stairs and the camera steps back and away. The music comes to a breakdown and we hear Bowie hushing our protests. All we can do is watch in helpless horror. Our hearts cling to every frame as we recall the old German proverb: “Die Hoffnung stirbt zuletzt.” We see our hero crawling on the ground reaching for his gun. Arabia walks calmly up to Buckaroo and kicks the gun further away. He turns Buckaroo on his back, then stands above him. The images edit back and forth between our two characters as Bowie reminds us the true moral of Kleistpark’s fable: “Never hear, never seen; secret life, ever green.” Their faces grow larger and larger in the frame. Buckaroo’s in great pain and anger. Arabia’s still at first, but we see for a moment a look of sorrow before a smile breaks out as the blurred image of his pistol comes into view. Then fade to black.