Mr. Drompf was furious. The United States of Animals had become rather curious. And only he could save it. He told all the animals so. Atop a mahogany podium, with his best suit and finest bleached rat’s nest, he told them in a voice strained and low: 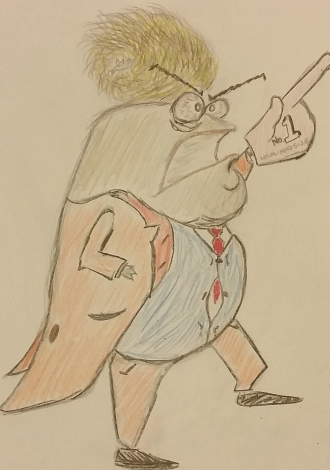 “You see, and we all know this folks, I’m the only one who can fix Swampland, Swampland, it’s sad to say, is terrible, just terr-i-ble! look at it, it smells, it’s hot, nothing gets done because you have all that brackish water and lily pads, don’t get me started with those lily pads, folks, they can’t support your weight, you get wet, it’s disgusting, I can’t stand it, we deserve better and I’m going to get you better, trust me, you know it, or my name ain’t Tummy Jeronimous Drompf, you know me, you know what I’m capable of, these swamp dwellers, they don’t care, they love it, but we need better and I’m going to get you better, I’m a toad, I don’t live in the swamp, I live on dry land, that means I can fix it, we’re going to do it, folks, send me in, I’m ready, because, and we all know it, we all know it, it’s gonna be great, simply fabulous, I’ve got the best folks in mind to handle it, you got me, the best, you can picture it right now I’m sure, it’s gonna be beautiful after I’m done with it, I know beauty, I’m a toad, vote for me: Tummy Jeronimous Drompf!”

And so on the day, the animal kingdom gathered in the Great Election Hall to begin shouting out the name of the candidate they preferred. Of course, it was not their voices that mattered as much as those of The Chosen Few—a much smaller hand-picked herd. The Chosen Few would ultimately elect the next leader. In truth, this was an antiquated system. One that should have been replaced long ago, but no one had apparently thought to do so. Instead the animals began to yell the name of their candidate, and although most of the animals did not want Mr. Drompf, his supporters were the most adamant. They locked arms and with a gurgling howl began to chant the “Call of the Drompf”…

The chant was simple enough to cut through the clutter and it grabbed the attention of enough of The Chose Few. Soon they began to chant along with the crowd, too:

The animal kingdom was a bit stunned, including Mr. Drompf himself. But he pulled up his sleeves and began to work hard indeed:

“I have the greatest plans, the best, you’ll see,” he claimed via tweeting bird. “No one knows what I know, no one but me!”

And soon the animal kingdom began to see what Mr. Drompf had in mind:

He hired Mr. V. Russ Mosquito to run the National Blood Bank, the Big Bad Wolf to oversee Housing, a Mr. I.M. Öblverius K. Ostrich as head of the EPA, the seasoned General Kiddo Warhawk as head of the Cabinet for Peace, a Giant Turd for Sanitation Director, and a crypto-fascist pile of nuclear waste as his Chief Strategist. In fact, all of the members of his cabinet were of this merit.

But his genius was not stopped there, though it was all some could bear. For being the great builder that he claimed, he hired construction crews to drain the Swampland he so shamed—using Drompf family-owned bulldozers and Drompf Premium Hosers of course. He drove back the brackish waters and the not-to-be-spoken-of lily pad. Everyone was pleased, and even his critics thought: “He might be all that bad.” He built a giant levee (made of solid gold) to keep it all behind… but only for a short period of time.

By the next day, even more construction workers were brought in to lend a helping hand. Much to the confusion of many, even Mr. Drompf, they started laying pipes that stretched far into dry land. Many animals became uneasy anew, save Mr. Drompf’s supporters who were few. For they mostly lived in silos that insulated them from the outside world.

Then, very suddenly one day, a great roar could be heard. It was no call of the wild; it was not caused by dog, horse, or bird. Someone had released the levee and all the dark putrid waters came rushing through. The swampy water ran down the pipelines with ease, and the horrible roaring sound grew and grew.

Finally, with a great burst! the waters soaked all the animal kingdom, quenching an unwanted thrust.